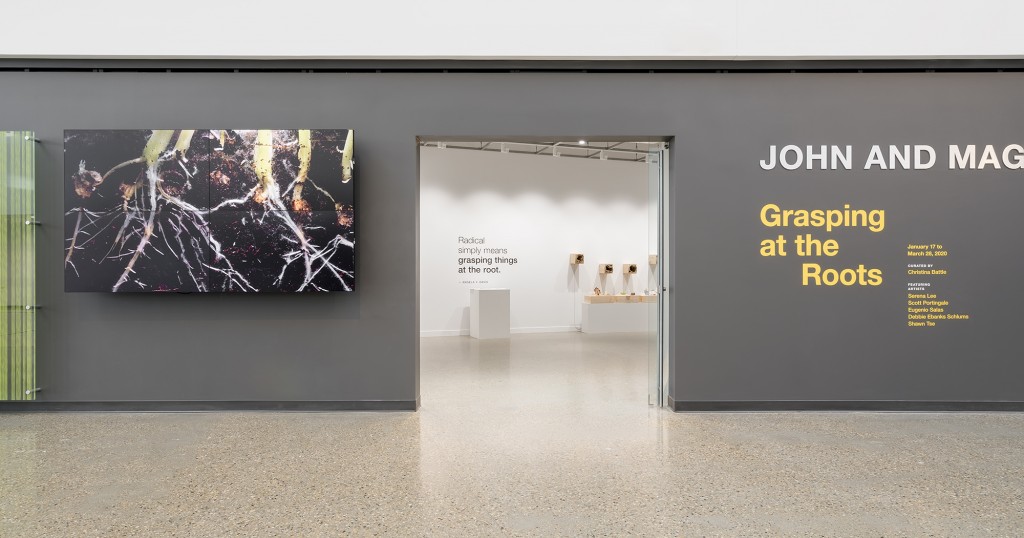 Taking cues from mycorrhizae, mutually beneficial associations between fungi and plants, Grasping at the Roots is an exhibition that looks to strategies artists use to support and sustain relationships with those they work with, and also to curatorial strategies that might in turn better support artists.

Our conversation, however, must begin with the obvious: the public is collapsing as an ideal within a political climate still driven by inequality, institutional unaccountability and economic austerity. In other words, as the longevity of the top-down, public-welfare-state paradigm is in question today, we need urgently to search for alternatives and to seek a more functional manifestation of public thinking and action. The question must be different questions if we want different answers.1

Grasping at the Roots2 takes cues from mycorrhizae, mutually beneficial associations between fungi and plants. Fungi have the ability to enhance nutrient take up in plant roots, ensuring healthy development; in return, they benefit by absorbing the plant carbohydrates they require to sustain growth. The exhibition looks not only to strategies artists use to support and sustain relationships with those they work with, but also to curatorial strategies that might in turn better support artists. Grasping at the Roots operates from the premise that this strategy of care has the ability to foster and develop community in sustainable and meaningful ways.

Artists in Grasping at the Roots value participation and working intimately with communities as a critical part of artistic practice. In a time when many—especially those on the margins—face real life threats and challenges, these artists prioritize community-building and engaged relationships built on responsibility and care. Incorporating a variety of tactics, artists have considered material forms along with site specificity in order to translate works that perform actively in the world for the space of the gallery.

Utilizing prolonged, ongoing conversation and participation as a curatorial strategy, Grasping at the Roots hopes to challenge the ways in which artists and curators work together: prioritizing collaboration, fair compensation and the strength of the collective model. A direct response to the urgent and critical time we live in, the exhibition sees itself as a necessary tactic, pointing toward, while simultaneously creating, a system of roots to continually build upon into the future.

Serena Lee – Doing the dishes – 2017, ongoing
Doing the dishes is a way to have a conversation with other daughters of single moms, or single moms, while doing something together. It’s an ongoing project that started in 2017 in Toronto and London, Ontario, where I began doing the dishes by word of mouth and with the curatorial support of Christina Battle. Doing the dishes happens in kitchens and in the public space of galleries, print and digital publication, finding form variously as conversation, performance, text, and visual descriptions.

This iteration of Doing the dishes was made possible by support from the Ontario Arts Council.

Debbie Ebanks Schulms – The Dwelling Museum – 2017, ongoing
The Dwelling Museum is conceived by and consists of a collection of glass objects made by immigrants, or children of immigrants, both new and old. Together, we coaxed objects out of clay—a controllable, recognizable, and tangible material—which contained embodied memories of home or the hopes and wishes of their new life in Canada.  Represented in this iteration of the Dwelling Museum are the stories four Syrian women—Rania Mallah, Sabah Abdulkadir, Nisrin Elahmad, Islam Hariri—who came to rural Ontario’s Simcoe and Dufferin Counties in 2015 and 2016 with their young families. Next to the objects are sensor-controlled speakers that activate when a body is in front of them. The speakers are designed for close listening to highlight the stories of these women, sometimes in their own voices and sometimes in mine if they preferred not to be recorded.

The Dwelling Museum was a way to continue to be in relation with these women after an intense one-year transition to living in Canada. The process of making a new home for their families was the structure by which we needed to work around. The objects and audio were made or recorded over a one-year period, in which we shared multiple tea times, drives, laughs and tears. DM workshops were storytelling possibilities; moments inhabited by activity geared towards themselves as individuals while working together with other women; opportunities to transfer important information.

Glass-casting is a multi-step process. Clay is soft and malleable. In order to hold on to the object that it represents, an inverse version of that object—the mould—must be made and the original destroyed. The final version in glass is a transformed version of the modelled clay; a fragile stand in; a memory. Moreover, the state of materiality of glass is undetermined; it never truly becomes a solid, but neither is it liquid anymore. Glass is, perhaps, some hybrid, inconclusive state comfortably holding multiple identities in suspension, a metaphorical process analogous to the experience of migration.

The Dwelling Museum was made possible through the generous support of the Reed T. Cooper Bursary of the Dufferin Art Council.

Eugenio Salas – Breaktime/Overtime Merch Store – 2017, ongoing
Eugenio Salas’s Breaktime/Overtime Merch Store is the result of a collaboration with Christina Battle (Curator), Carolyn Jervis (Gallery Director) and artist Alex Nutini. A small run of aprons, tea towels, prints, and zines will be available at MacEwan University Mitchell Art Gallery during the Grasping at the Roots exhibition. The artist is inviting audiences to participate by taking one of the pieces home.

Breaktime/Overtime is a longitudinal collaboration with a group of middle-aged immigrant women of colour with whom Salas worked for four years at a cake factory in London, producing over 3500 cakes per shift. Together they reimagined the production line and reconfigured its production logic as a way to reclaim artistic agency to produce, The Supercake, a 22-foot long edible installation.

In addition, he will collaborate with a local immigrant baker to host a Merienda (teatime), which is a tradition that came from Europe to the Americas via Spanish colonization.

Connecting Overseas: Safe & Secure is a socially engaged project where an artist develops four anonymous relationships in Edmonton and is the messenger delivering care to loved ones living amidst the Hong Kong protests. 'Senders' work with the artist to create space, dialogue, and art around caring for 'Receivers' overseas while negotiating how to navigate privacy in our increasingly monitored world.

Public Programming tied to the exhibition:
Debbie Ebanks Schlums hosted a Glass sculpture and storytelling workshop for newcomers. The free, weekend class explored cast glass sculpture as a form of storytelling. The glass vessels made were then added to exhibition after the workshop. (link to invitation).

While in Edmonton, Serena Lee met with and did dishes for 8 women in their homes, performed in the gallery, and generated a new sound work inspired by her visits which was then added to the installation in gallery. (link to fb event).

Shawn Tse led a public sharing circle which offered a chance for further dialogue about the protests in Hong Kong and their impacts within Edmonton’s Chinese community. (link to fb invitation).

Eugenio Salas organized a Merienda (teatime) — a tradition that came from Europe to the Americas via Spanish colonization — in collaboration with a local immigrant baker to provide an opportunity for audiences to engage in the complex political histories of food and food production. (link to fb invitation). *this event was cancelled due to pandemic – I hope we'll have a chance to host it at some point in the future.


All Images by Blaine Campbell, courtesy of The Mitchell Art Gallery. 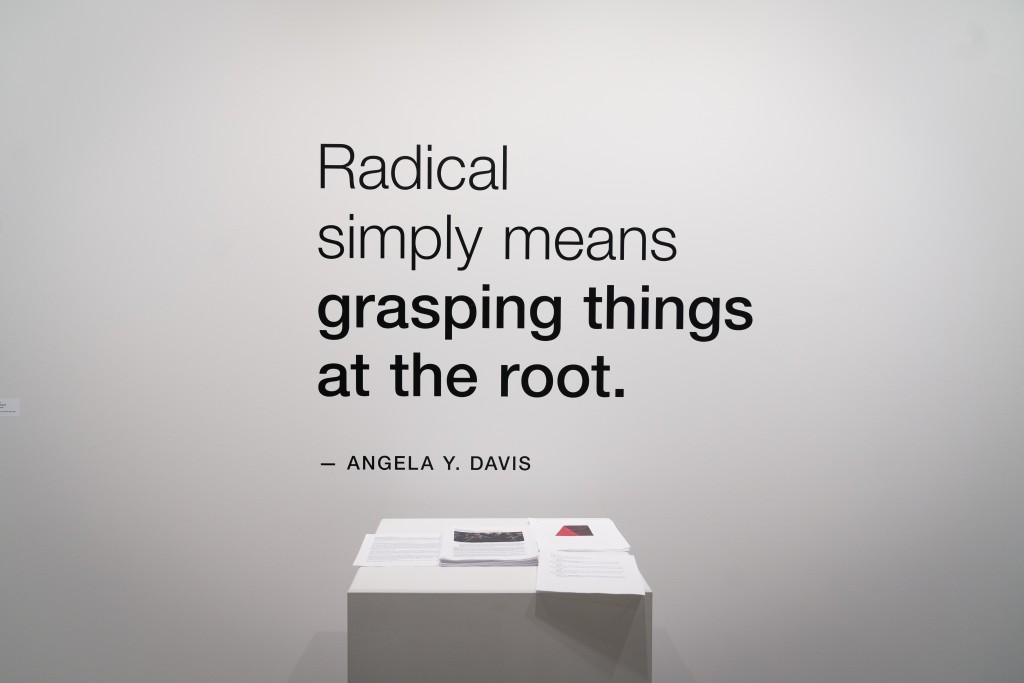 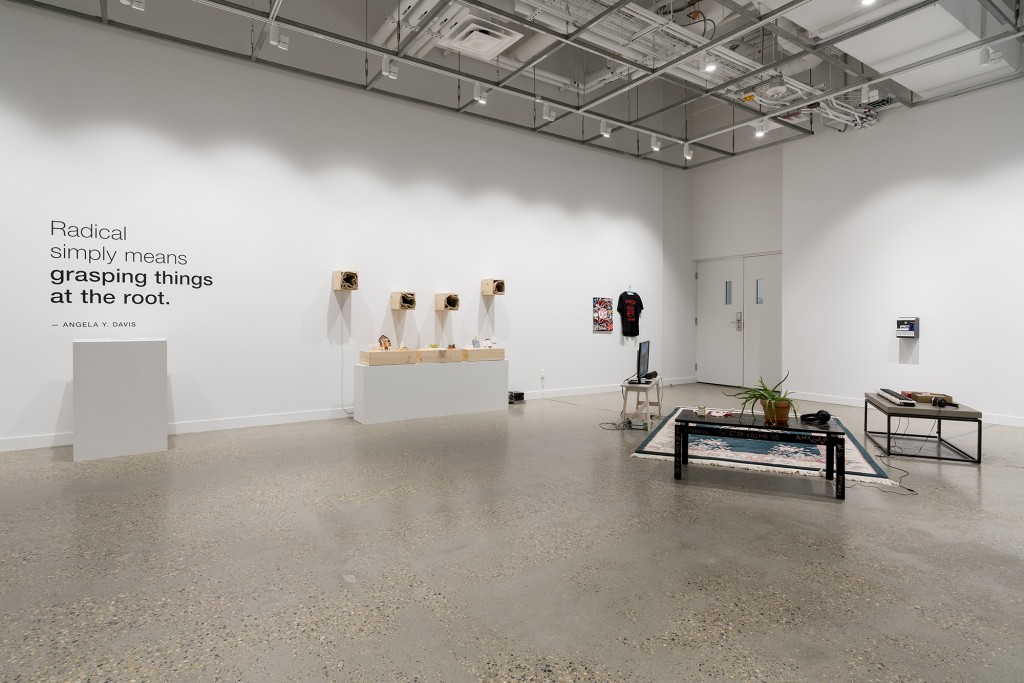 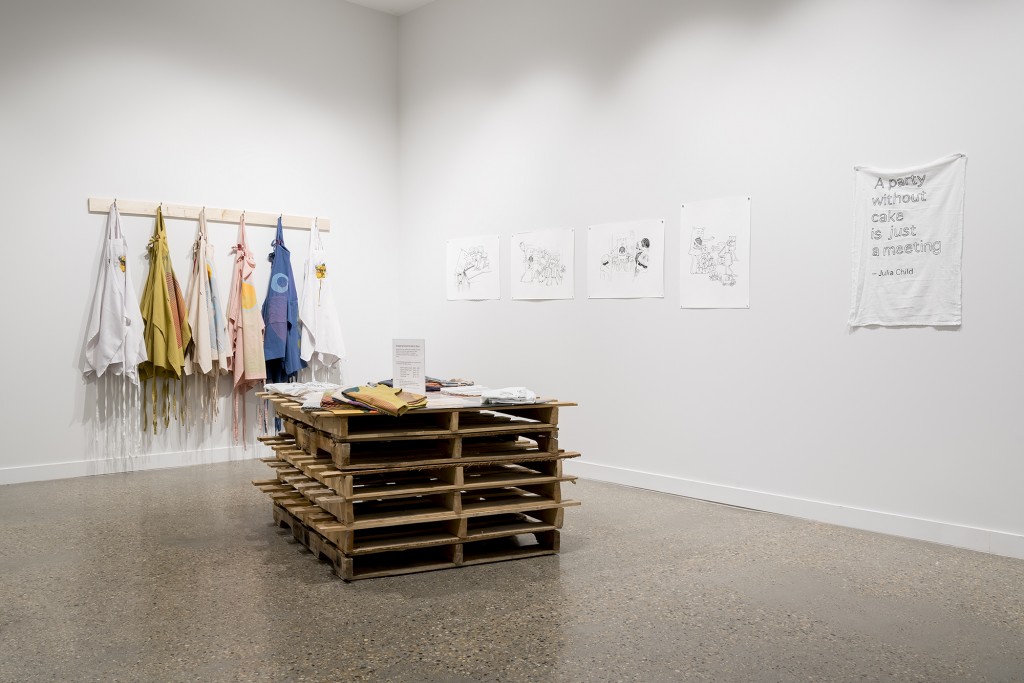 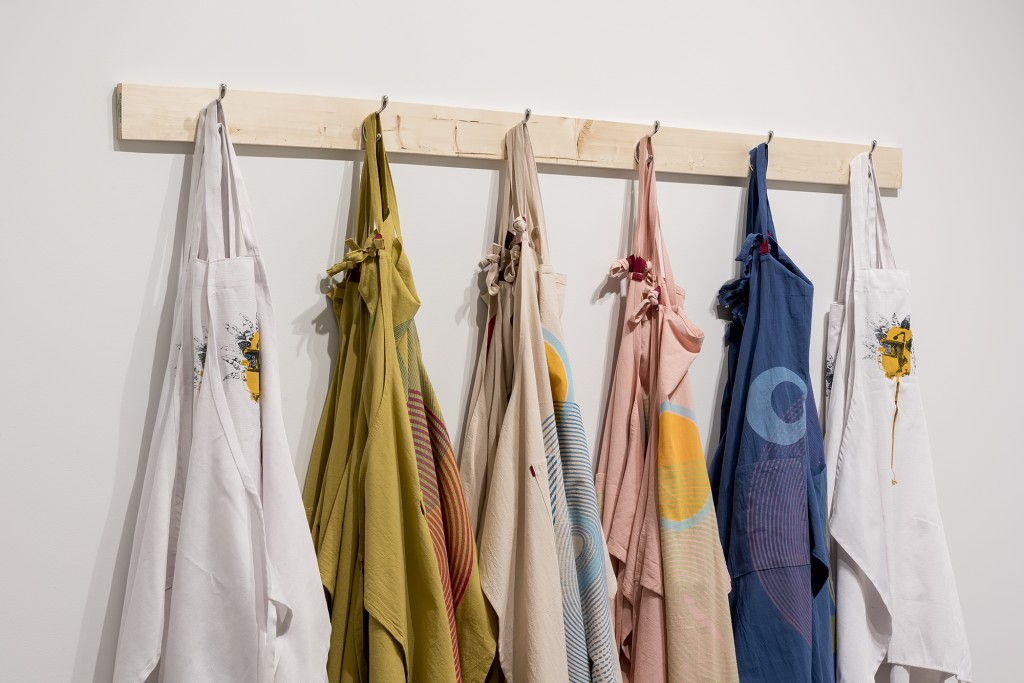 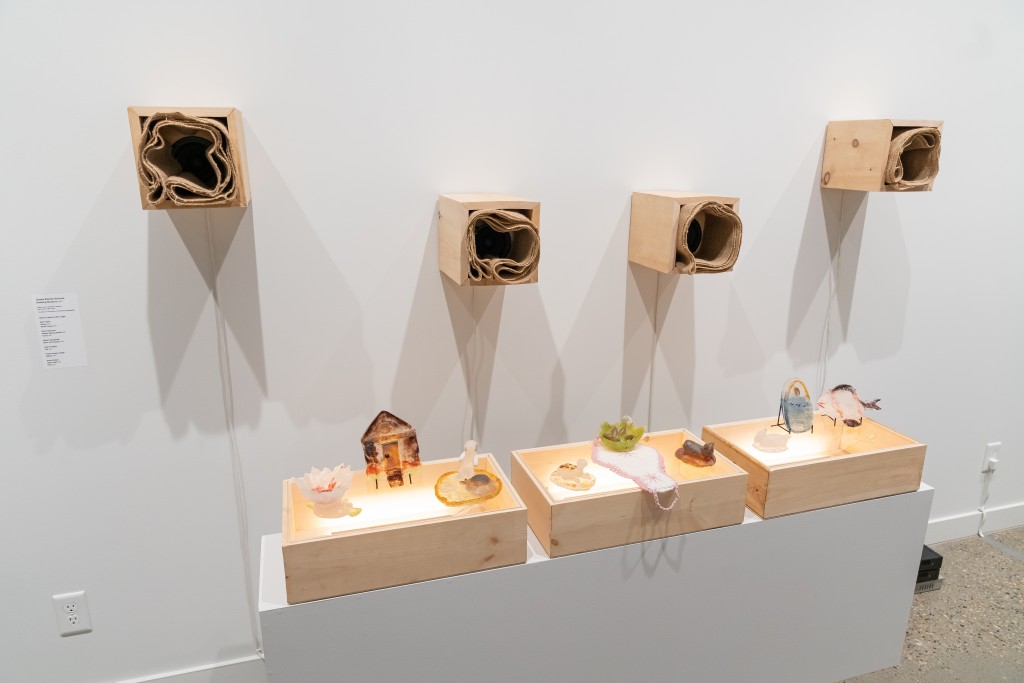 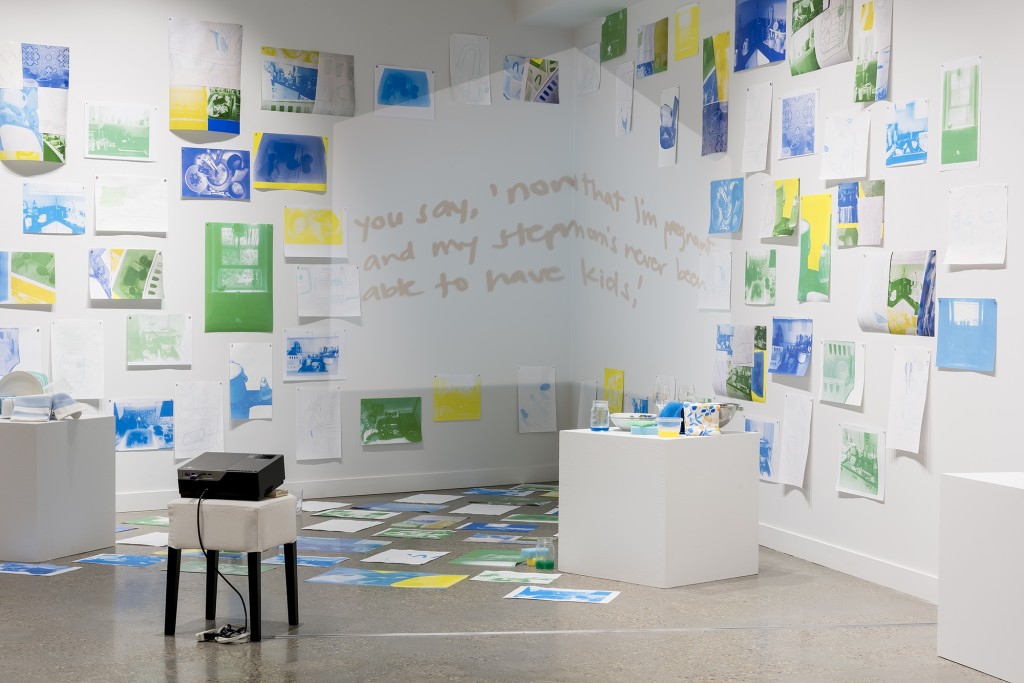 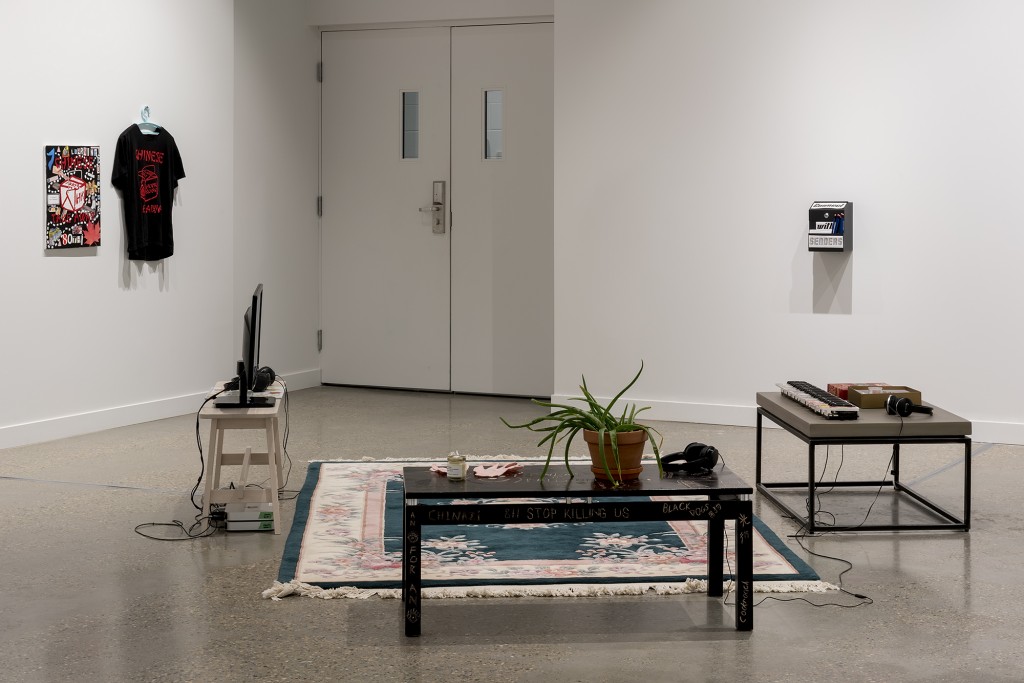 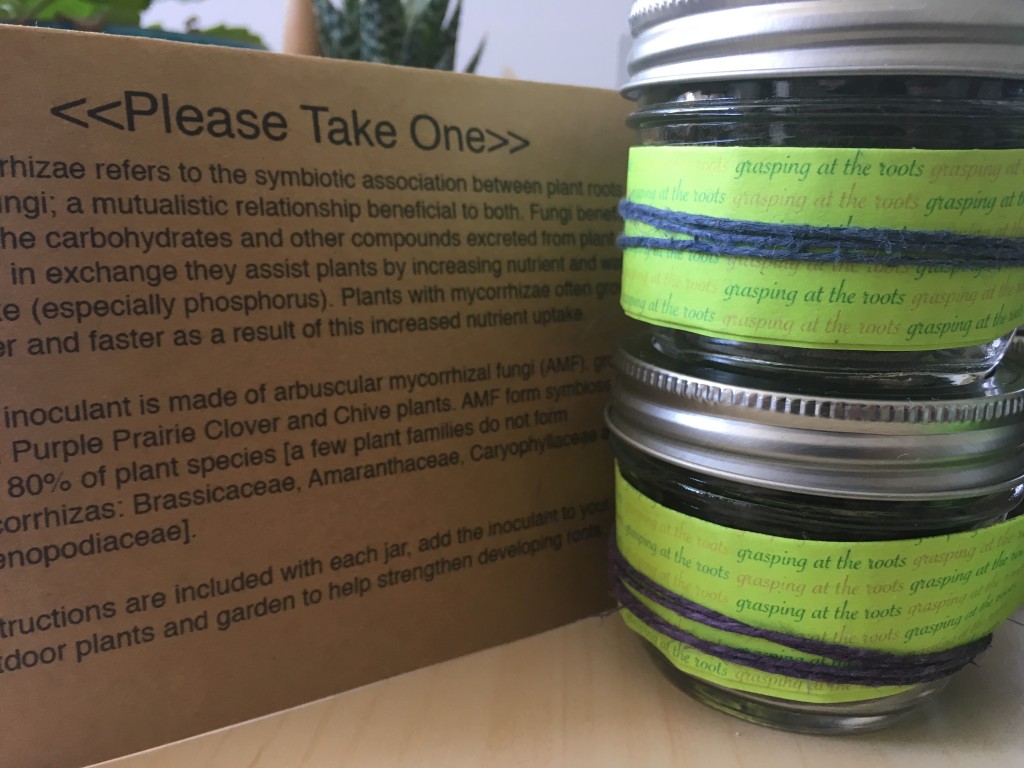 Mycorrhizal Fungi Inoculant, grown and shared within the exhibition.