the spiders are organizing themselves…one day soon they’ll take over.

Christina Battle works like a printmaker, inscribing images onto film using a collage or photogram technique. Her work addresses psychological and social “disasters,” whether through narrative tropes or the interplay of image and text. In the cameraless film Behind the Walls and Under the Stairs (2005), Battle has used the photogram technique, laying figures on the film stock and shining a light onto them to inscribe their shadow into the material. With unexposed film’s multi-layering of colours, this produces a shock of vibrancy against a wall of pure blacks, shaping the frame of the objects placed onto the film stock. Playing on the horror genre, Battle has used the image of the spider coupled to her trademark evocative titles to call attention to the possibility of danger lurking nearby. [Vicky Chainey Gagnon – excerpt from "Behind These Walls: Contemporary Canadian Experimental Short Films"] 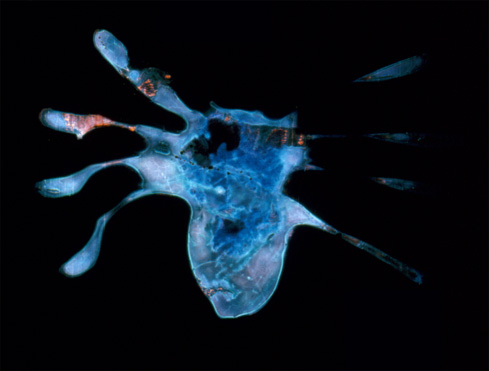