Beginning with the root of the term disaster – from the Greek (dus-) ‘bad’ and (aster), ‘star’ this project considers disaster from an astronomical sense, imagining multiple scales of disaster as causing disruption and temporary disorientation on a planetary scale. Humans have looked to the movement of stars as a way to make sense of the terrestrial for millennia, developing elaborate systems to read celestial bodies as a way to explain and predict events on earth. Studying the stars in order to discover more about the galaxy, astronomy tells us that we are in fact born of the stars, made up of the heavy elements they distribute across the universe. BAD STARS considers disaster through the metaphor of those stars that have gone wrong—as events that cause unprecedented change from a once-stable structure, and influence a wider, interdependent network.

Seeing warnings about past disasters as a way to bypass potential disasters of the future; and considering disaster as a series of linkages extending from the environmental, cultural, political, economic, and social, BAD STARS draws threads between these connections and wonders how they might be realigned in ways that will help to move beyond them. The project sees the framework of disaster as an active strategy that can aid in the shifts in perspective necessary to advance beyond the causes of disasters themselves.

BAD STARS invites an interdisciplinary group of contributors to help forward the discussion, beginning with the invitation to contribute to a wall of photographic imagery included in the exhibition. Representing a variety of disasters from a number of perspectives and scales, the contribution of images aids in the widening of our considerations as to what constitutes a disaster while also providing context for the development of additional programming.

Furthering established research in social sciences about how communities behave in times of disaster, Rebecca Solnit’s A Paradise Built in Hell provides a number of historical examples of how the social is enacted after catastrophic events; illustrating that in general, individuals are overwhelmingly altruistic in post-disaster situations: “Disaster may offer us a glimpse, but the challenge is to make something of it, before or beyond disaster: to recognize and realize these desires and these possibilities in ordinary times.”1

Through the creation of space for dialogue, and by bringing people together who otherwise might not, BAD STARS pulls from the framework of the post-disaster neighbourhood considered by Rebecca Solnit. Making room for those from various disciplines to come together for shared conversation and experience, programming invites those actively researching and working to tackle issues of disaster into the space of the gallery. By inserting the opportunity for conversation and the introduction of diverse perspectives and ideas, within this discursive programming lies the possibility for the reshaping of current systems and the aversion of potential disasters to come – a hopeful first step in ushering in real structural change.

More about the programming:
in Toronto, BAD STARS included a number of programming events to help forward the conversation. Guests include: Michael Williams from the Universe Planetarium at the University of Toronto [May 4, 2018], the Indigenous Environmental Justice Project [May 26, 2018], and the re:assemblage collective [June 9, 2018].

More about the video works:
A central video consisting of google earth images of Sarnia, Ontario shapes a narrative linking together geomythology, the death of stars, satellite mapping and air pollution, overall suggesting that the technologies monitoring and representing the earth back to us might also be forewarning us of the environmental repercussions of industrial pollution.

Along with the video works which are presented on a series of screens throughout the space, nineteen photographs, printed on vinyl and framed within the format of email conversations are installed on a central wall. Contributed by an interdisciplinary group, the photos represent a variety of disasters from a number of perspectives and scales. Helping to forward the discussion surrounding the complexity of disaster, the contribution of images aided in the widening of our considerations as to what constitutes a disaster while also providing context for the development of additional programming.

Writing about the Exhibition:
Jayne Wilkinson mentions BAD STARS in her “A Year in Contradictions” for Canadian Art Magazine online, 2018. 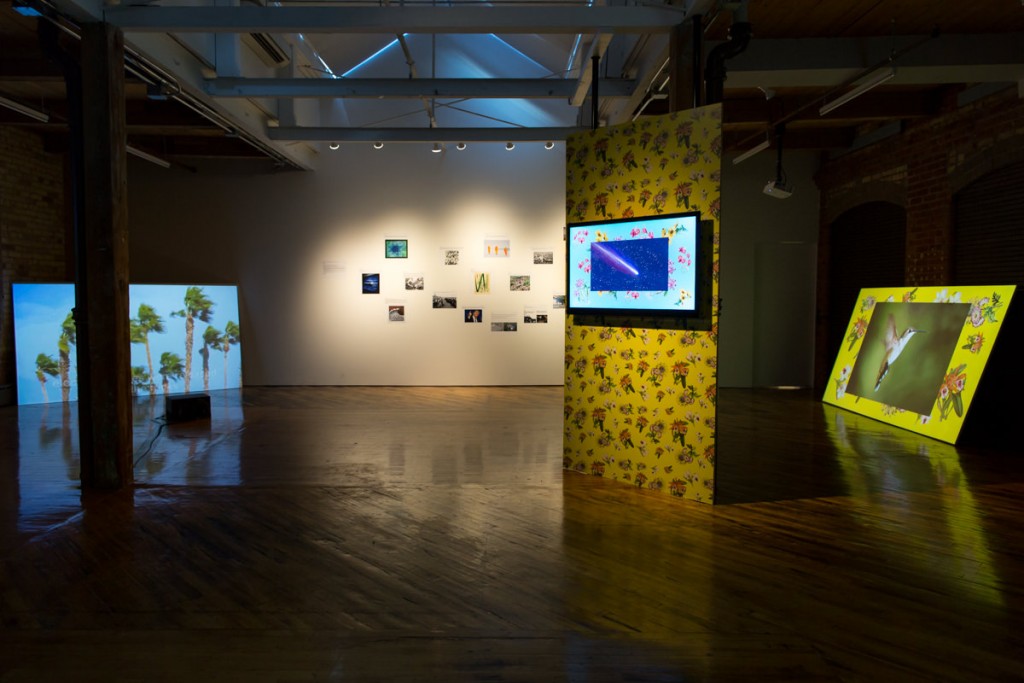 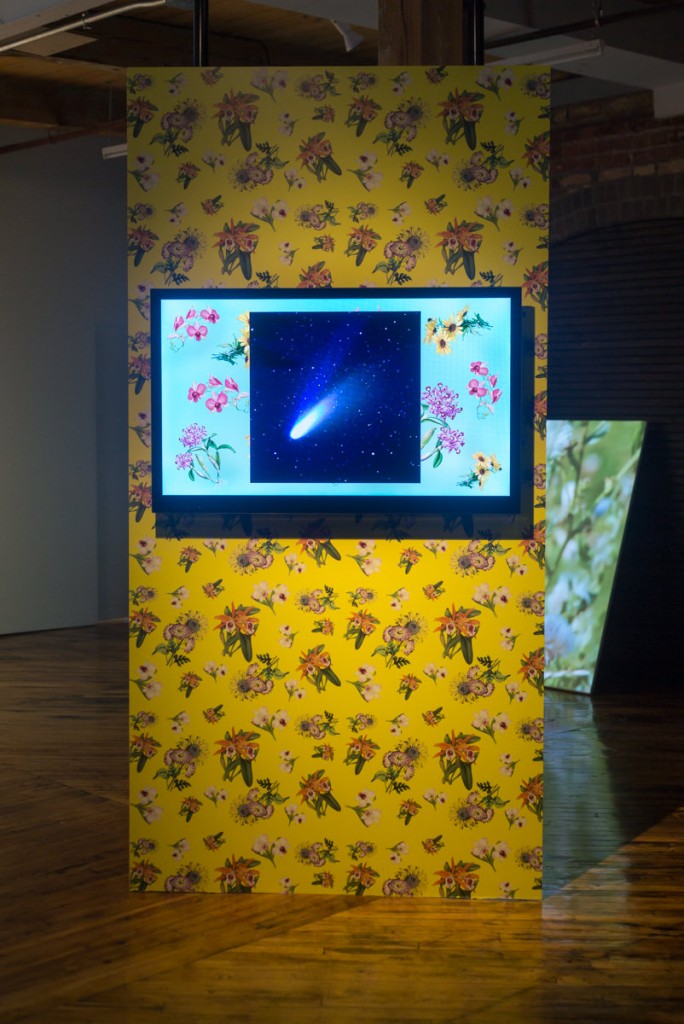 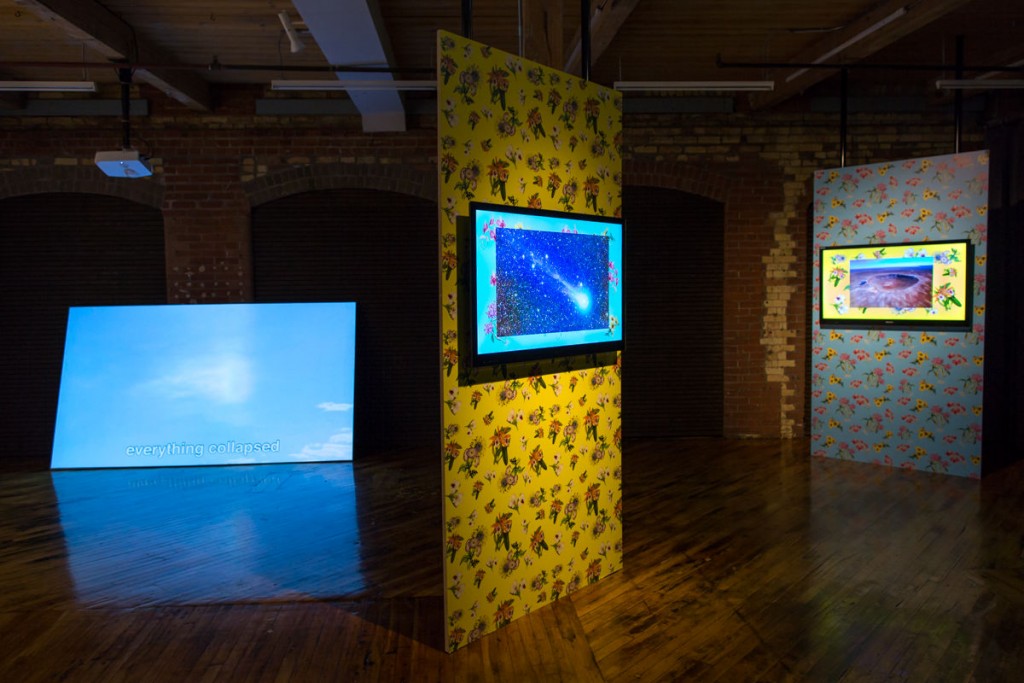 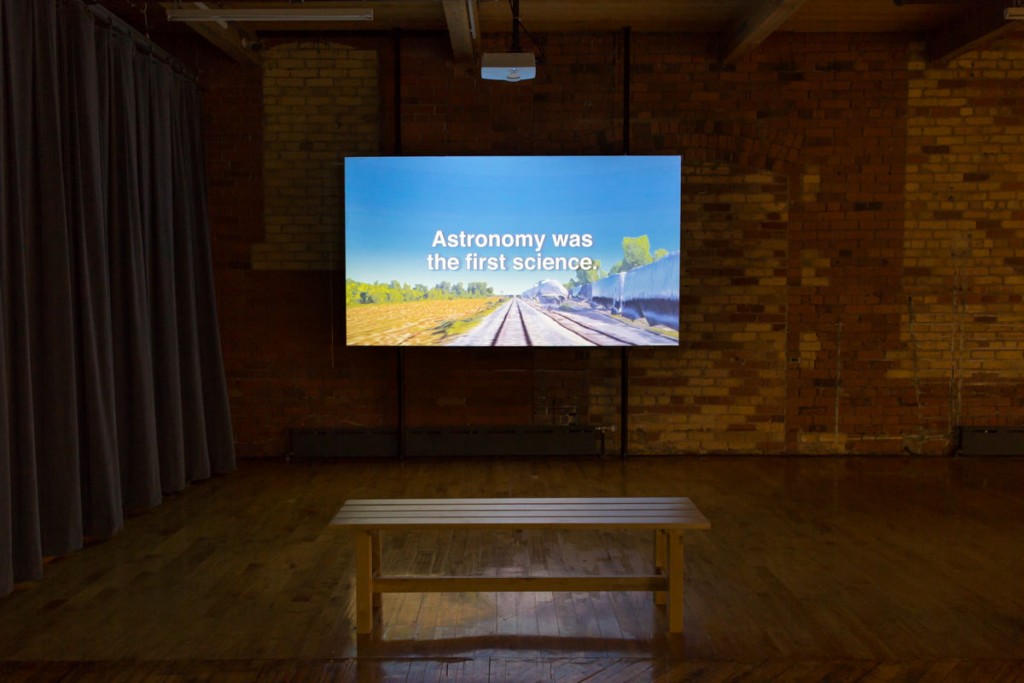 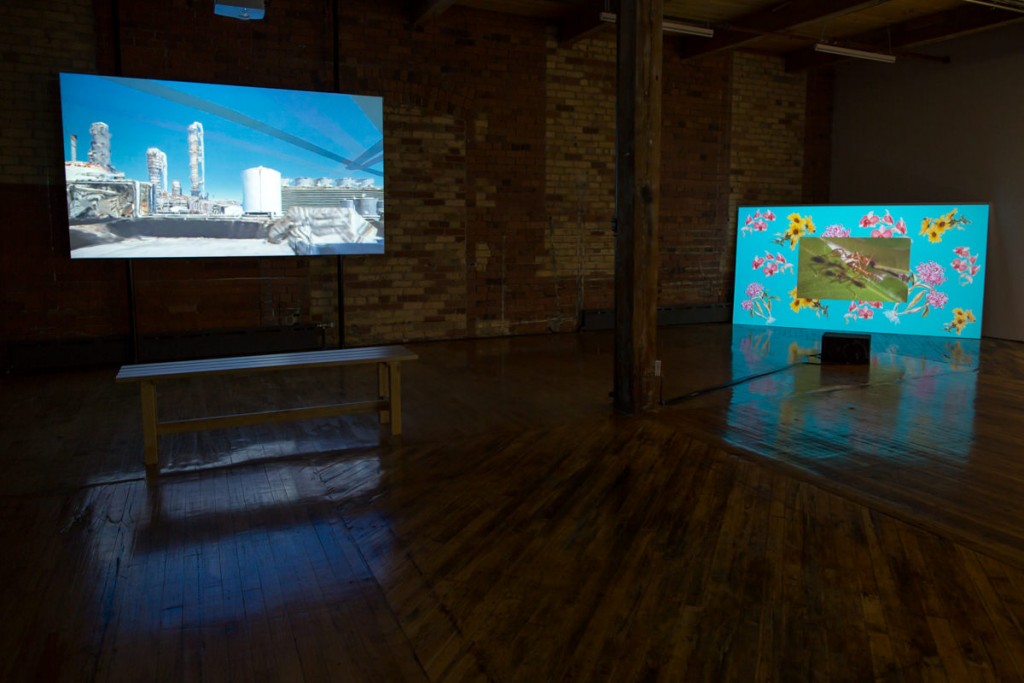 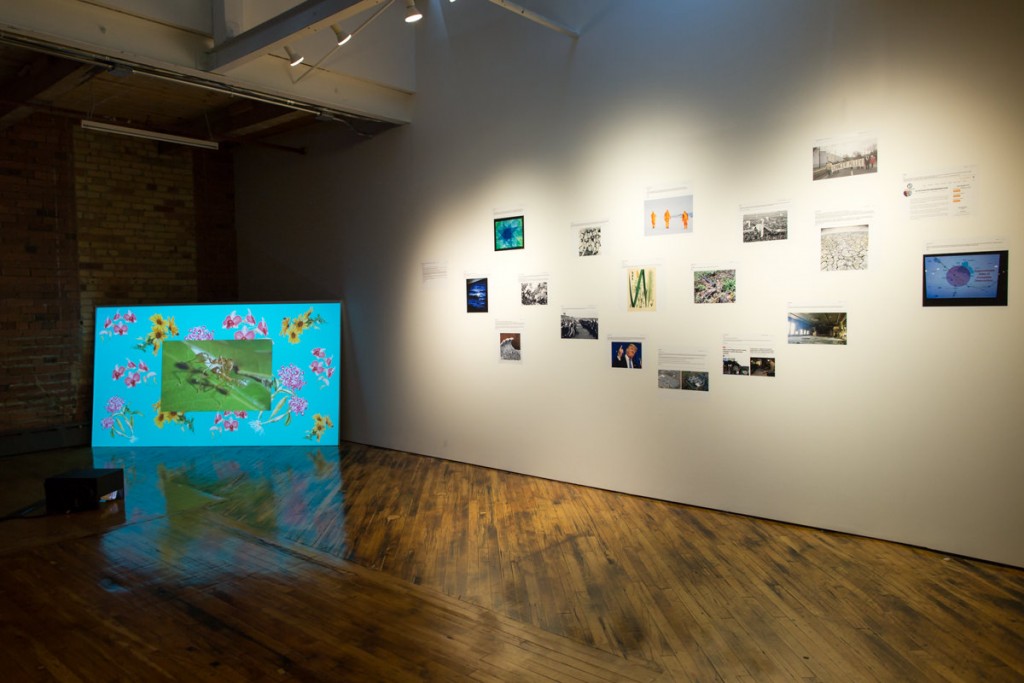 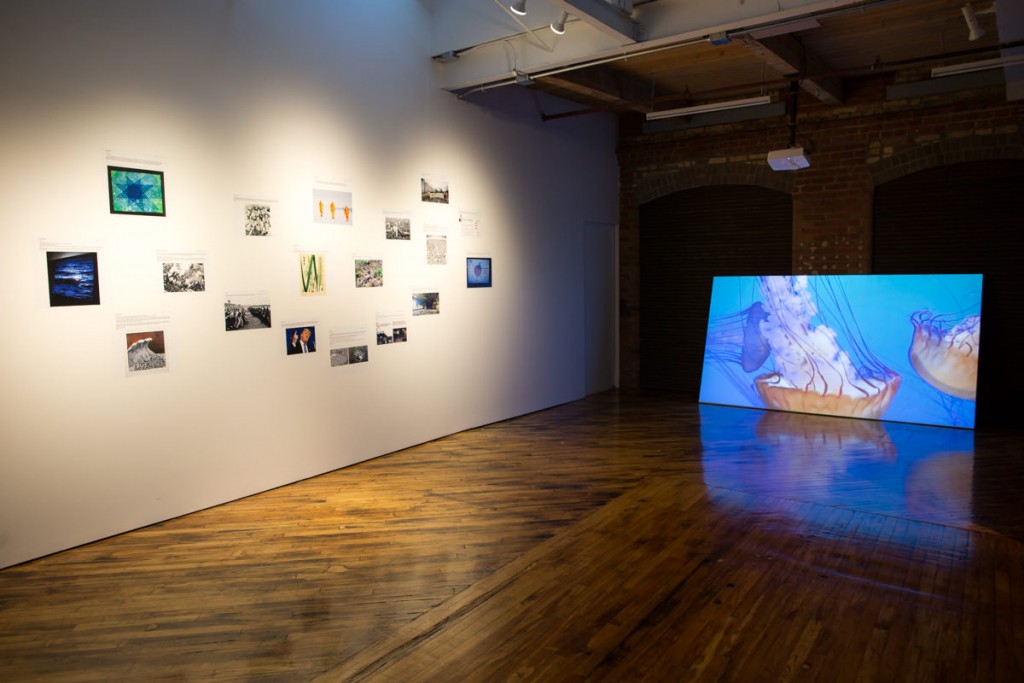 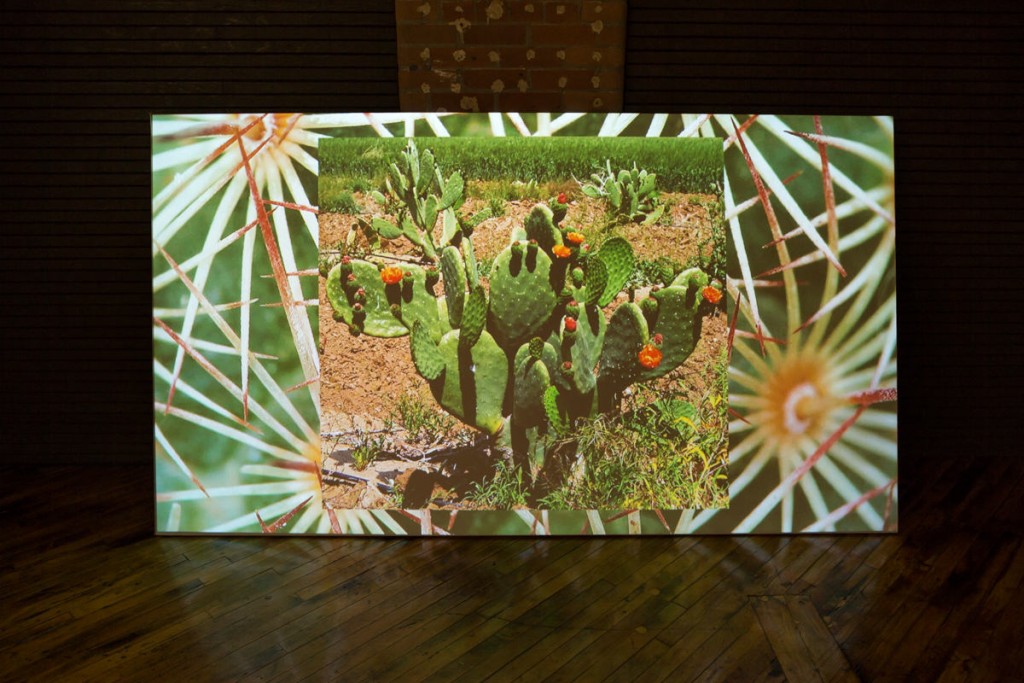