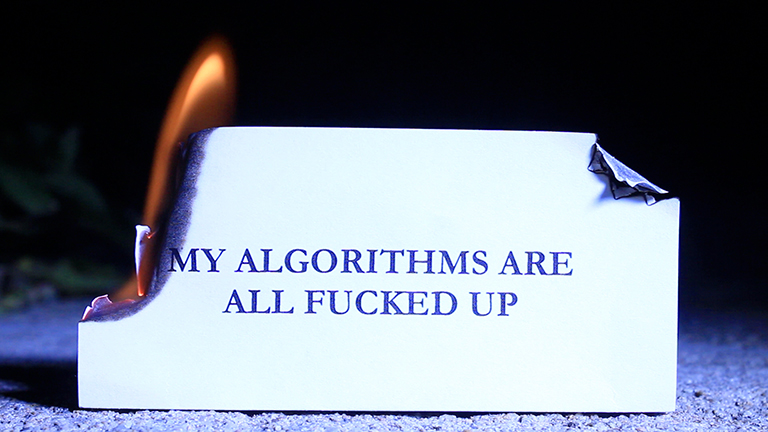 from the notes to self series (2014 ongoing)

Christina Battle is an artist based in amiskwacîwâskahikan, (also known as Edmonton, Alberta), within the Aspen Parkland: the transition zone where prairie and forest meet. Her practice focuses on thinking deeply about the concept of disaster: its complexity, and the intricacies that are entwined within it. Much of this work extends from her recent PhD dissertation (2020) which looked closer to community responses to disaster: the ways in which they take shape, and especially to how online models might help to frame and strengthen such response. She is currently the Online Editor for BlackFlash magazine, dedicated to presenting critical opinions, urgent issues and divergent artistic practices from across the prairies, Canada, and beyond.

Artist-Run Centre Board & Committee Involvement:
Latitude 53 Board of Directors: 2022, ongoing

For almost 20 years I have worked as a media artist, curator, arts administrator and educator and have been an active member of a number of communities. My practice is founded in a DIY ethos and I see culture as being entirely dependent on it if it hopes to remain current and progressive. As such, I consider organizing and collaborating to be active and critical parts of my practice, often with the goal of bridging conversation across disciplines. Primarily manifesting as video, installation, web, participatory, and curated projects, I consider artistic work to be a critical and effective way to illuminate the complex negotiations we find ourselves facing in society, and media art as uniquely situated to engage with contemporary culture as an urgent subject. I recently received a PhD in Art & Visual Culture from the University of Western Ontario where I situated my research and practice under a dissertation titled: Disaster as a Framework for Social Change: Searching for new patterns across plant ecology and online networks.

Multidimensional by definition, disaster is seen as a series of intersecting processes including social, environmental, cultural, political, economic, and technological, which are implicated not only in how disaster is caused but also in how it manifests, is responded to and overcome. Through this research I consider the ways in which disaster as both subject and framework might be utilized as a tactic for social change, and as a tool for reimagining how dominant systems might radically shift. Especially interested in how our engagement with media shapes our understanding and interpretation of information, this research focuses on thinking more critically about the tools of technology (especially that of the internet and new media technology) as part of contemporary language, and considering how information disseminated via online platforms operates within the framework of disaster. At the root of my approach is a focus on the role of collaboration, collectivity and conversation as strategies for tackling the pressing issues we face today.

My research expands beyond the impact of large scale natural disaster events, looking to disaster as action, as more than mere event, and instead as a framework operating within larger systems of power. The overarching question that my artistic work considers is: how might small gestures of artistic practice be utilized as tools for change? Through the generation of artistic works and curatorial projects, my approach relies on the premise that creating opportunities for new conversations around disaster has the potential to contribute to the reimaging of how dominant systems might radically shift. Strategies for actively working through this research manifest through the organizing and curating of film/video screenings, exhibitions and events, seen as a way to facilitate conversation and bring people together to engage in shared experiences. Through this part of my practice, I see my role as one of a facilitator who can help to shape space for others’ voices to be heard, who can contribute to actively diversifying both artistic spaces and their audiences, and who can provide opportunities for critical engagement with conversations that might not otherwise occur within artistic institutions.

A bit more about me to help provide some context with regard to my perspective, which is a Western, specifically North American one. I am a settler in Treaty 6, the daughter of a white, 3rd generation settler mother whose father emigrated to Canada from the US (sometime before the 1940s), and whose maternal grandparents emigrated to Canada from the UK in the early 1900s, before (grandfather), and after (grandmother) WWI; and a Black American father who has been a Permanent Resident of Canada since the 1960s and whose parents and grandparents lived in the Southern US, with an ancestry disrupted by the American slave trade. I myself have repeatedly moved across North America and between both Canada and the United States.1 The strategies and insights explored throughout my practice should be seen as coming from within this particular lens. Along with this individual perspective, thinking across my work and research pulls heavily from ecology, more specifically, plant ecology.2 Relating to the overall complexity that disaster studies engages with, ecology is thus defined: “The English word ecology is taken from the Greek oikos, meaning ‘house,’ our immediate environment. In 1870 the German zoologist Ernts Haekel gave the word a broader meaning: the study of the natural environment and of the relations of organisms to one another and to their surroundings. Thus, ecology is the science by which we study how organisms (animals, plants, and microbes) interact in and with the natural world.”3 I look specifically to ecological relationships among plants—especially how plants evade, respond to and prepare for disaster—as a way to find strategies for our own communities. It is important to note that my working definition of community is one that also draws from ecology: “many populations of different kinds living in the same place constitute a community,”4 and necessarily includes both human and non-human entities. [pulled and adapted from my dissertation, 2020]

1: Definitions of generation status as set by Statistics Canada: “Generation status: Canadian-born children of immigrants,” Statistics Canada, modified July 25, 2018, https://www12.statcan.gc.ca/nhs-enm/2011/as-sa/99-010-x/99-010-x2011003_2-eng.cfm; This extended introduction to help explain where it is that I, and thus my perspective, comes from was inspired by comments made by Mohawk/Tuscarora writer Janet Rogers at a recent talk in Edmonton. She discussed the importance of knowing and stating one’s own ancestry as a way to begin the Reconciliation process with Indigenous peoples. While in dialogue with Amy Fung at Latitude 53, Thursday, May 23, 2019.
2: Focus on this discipline is not new to me. Prior to engaging with artistic practice, my university studies were within ecology, which helped to shape my overall worldview (I earned a Bachelor degree of Science with specialization in Environmental Biology in 1996).
3: Robert E Ricklefs, The Economy of Nature, Third Edition (New York: W.H. Freeman, 1993), 1 (italics mine).
4: Ibid., 3.

selected written things about my work:

Jayne Wilkinson wrote about Plastic Heart: Surface All the Way Through in MOMUS: An Aesthetic of Enough.

A Year of Relations by Noor Bhangu for Galleries West.

To Reciprocate All They Freely Offer by Mercedes Webb for C Magazine (issue 147 –Gather).

Lillian O’Brien Davis’s essay about connecting thru grasses [at the Art Gallery of SouthWestern Manitoba, curated by Alyssa Fearon. October 1 thru November 21].

An essay discussing Today in the news more black and brown bodies traumatized the soil is toxic the air is poison by Gabrielle Moser was published in Esse Magazine – Surviving the End of the World: Colonialism and Climate Change in the Work of Christina Battle and David Hartt.

Mediated Disaster and Unmediated Climate Anxiety: A Conversation with Christina Battle and Jayne Wilkinson – in Other Places: Reflections on Media Art in Canada

Esmé Hogeveen reviewed Notes to Self for Another Gaze: Review: Notes to Self by Christina Battle – part of Forum Expanded, Berlinale

Jayne Wilkinson mentions BAD STARS in her “A Year in Contradictions” for Canadian Art Magazine online, 2018.

Echoes in a Stranger Land– exhibition essay by Ellyn Walker for End Transmission at the Thames Art Gallery through November, 2015.

Back To The Future – A review of the group exhibition at Casa Maauad in Mexico City by Jacob Wick – Bad At Sports (July 17, 2015)

What Was Will Be (pdf)– A review of dearfield, colorado’s exhibition at Gallery 44 in Toronto by Daniella E. Sanader – BlackFlash Magazine 31.3 Fall 2014

“Questions for a Hillside” By Meg Walker (pdf) Exhibition Essay for the space between here and there (the yukon river) at the ODD Gallery.

Artoronto.ca “Christina Battle & Kristie MacDonald: What Was Will Be” review of dearfield, colorado exhibition at Gallery 44 by Shellie Zhang, 2014