seeds are meant to disperse
an ongoing project, 2015 –>
[the project formerly known as seeds for the end of the world]

seeds are meant to disperse (2015-ongoing) is an ongoing project where I grow, save and share seeds. Seeds take time to grow, to harvest, to prepare, and to share—an act that I see as gift as much as necessity and survival. As such, the seeds are offered as barter or gift, in an attempt to encourage and support alternative systems of exchange. As the seeds are gifted and grown they are meant to help others begin to build a world different from the trajectory it is currently on.

As an ongoing and forever growing project, I continue to adapt and rethink strategies as the work strives to be more aware of itself: of the ways in which it might help draw attention to food security & sustainability, species diversification, seed copyright, climate change, urban renewal, and anti-capitalist forms of exchange. Seeds are meant to disperse.

Through seeds and their dispersal, seeds are meant to disperse actively thinks about both time and space differently, considering ecological change from the scale of the geologic and political change from the scale of the micro gesture. Preparing seed packs each year to be traded and shared, the project is documented and archived on social media as a way to meet and engage with others interested in plants and alternate forms of exchange. To date, I have received a number of trades for the seed packs including artist books, sculptures, jewelry, photographs, as well as other seeds. 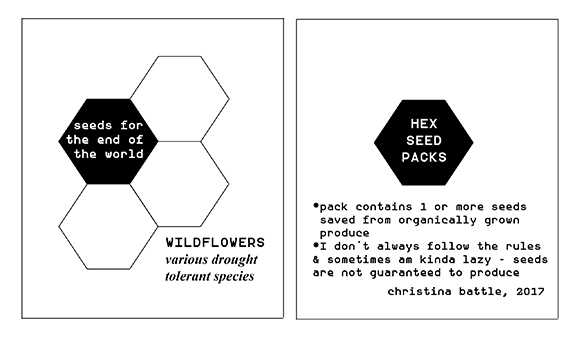 If you'd like a seed pack get in touch, they are offered through barter only. Send me your seeds, zine, book, sticker, 7" record, MP3 download, DIY electronic project,  knitted goods, drawing, canned or baked goods**, produce, etc in exchange.

All barters must be mutually agreed upon before exchange can take place.

–>Pictures of my gardening adventures Here<–

My seedling starter guide from 2014 (for the Park Hill Community Garden in Denver) is here as a PDF. 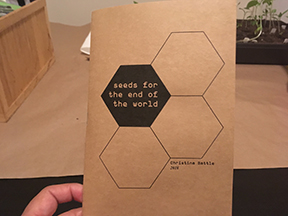 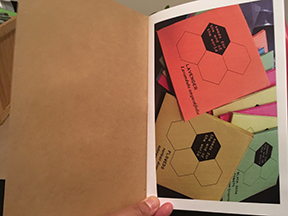 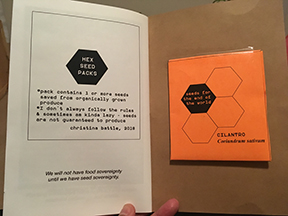 New Zine made for the i believe in living exhibition curated by Ellyn Walker (April-June 2018) is available for trade. Same barter infos apply as above. get in touch if you'd like to make an exchange!

A pdf of the zine is available online here.

Documentation from the i believe in living exhibition – curated by Ellyn Walker at Untitled Art Society, April 21 – June 30, 2018. All images: Katy Whitt. 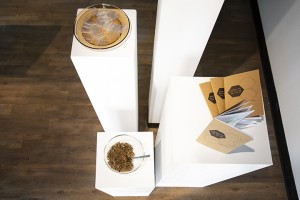 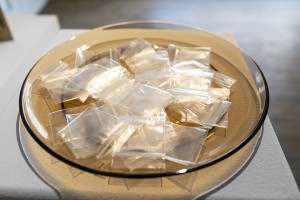 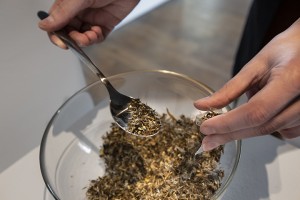 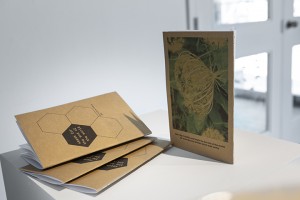 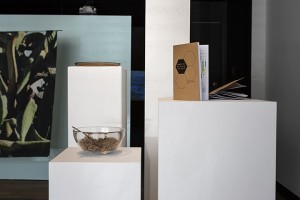 New Zine!
in the garden (one) summer 2018
Available for trade. Same barter infos apply as above. get in touch if you'd like to make an exchange! 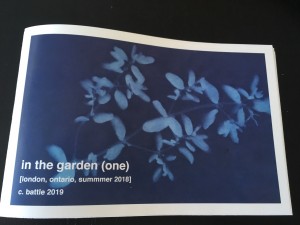 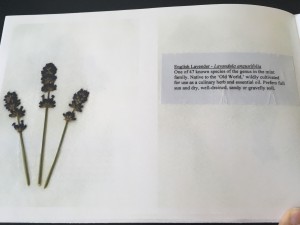 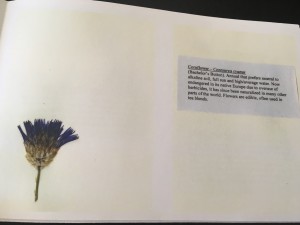 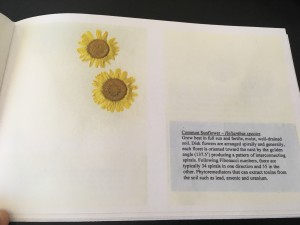 In the Garden [summer 2018].
The In the Garden series consisted of two events where community members were invited to sit in the garden and get to know one another while engaging with plants grown from the seeds for the end of the world project. Together we pressed flowers, made sun prints, documented the garden in water colours, made hand sewn lavender sachets and considered the ways in which plants might help bring us together.

New Zine! [Limited edition of 25, each with instruction set and 5 Common Sunflower Seeds – to be planted spring/summer 2020 in & around various neighbourhoods in Edmonton]

Reclaiming the Invisible (2019)
Zine & participatory project made for the Mitchell Art Gallery (Edmonton) for an event I organized as part of the programming for Leanne Olson's exhibition – With all Things Considered. Special thanks to Carolyn Jervis!

Reclaiming the invisible considers waste that is primarily invisible to us, waste that is entrenched in the soil and unidentifiable to the naked eye: contaminates offset from industry and methods of extraction. That we have built our waste management sites outside of daily view is by design and this participatory event wonders how it is that we might see waste differently, and how our relationship to waste might shift if we had some way to see it anew.

Starting with seeds from the seeds for the end of the world seed-saving project (2015, ongoing), participants will consider how hyperaccumulators—plants that have the ability to take up more metals than normal—are utilized in phytoremediation projects to help rid toxins from the earth. Interested in how it is that together we might think through issues of invisible waste, Reclaiming the invisible looks to how plants might help guide us in this effort.

The event is split into two parts: Nicholas Brown will present examples of bioremediation and phytoremediation strategies currently in practice around Edmonton, followed by a participatory action inspired by the event scores of the FLUXUS movement. This action will extend responsibility for land reclamation on to participants, providing them the tools they need to reclaim toxic land in their own neighbourhoods and communities.

Nick Brown is primarily interested in enhancing land reclamation techniques through the application of native plant-microbe interactions. He earned his BSc in Land Reclamation through the University of Alberta, and has developed field and lab experience as a lab technician in grassland and forest ecology. Nick is investigating how we can use native plant species to enhance degradation of hydrocarbons in soils, and is assessing the effects these species and the soils have on the composition and function of soil microbial communities. He is currently pursuing an MSc in Land Reclamation and Remediation from the University of Alberta.

After the Reclaiming the Invisible event, I wanted to think more deeply about some of the ideas and concerns raised during the evening. A few artists who were at the talk joined me for an evening of thinking and making together – the night is documented here.

Some interesting articles on the importance of saving seeds and such:
Scientists Add 50,000 Seeds to Arctic Doomsday Vault Because Everything Is Awful
How “open source” seed producers from the US to India are changing global food production – VOX
Saving the seeds : an old technology for a new climate – The Taos News
Preserving Seed Diversity – Food Security/University of Chicago
Salsa Primeval: 52-Million-Year-Old Tomatillo Found
The Nectar Garden: The Importance of Planting a Haven for Pollinators
Bee Plants – Attracting More Bees And Pollinators to Your Garden
Seeding the future? 'Ark' preserves rare, threatened plants
Seed Saving is the Original Sharing Economy
Together we can save the monarch butterfly
Let's get seasonal! [from the Farm Project]
As Climate Change Threatens Food Supplies, Seed Saving is an Ancient Act of Resilience

seed packs are limited and the types of seeds are dependent on various factors.

* I'm kinda lazy – cross pollination across varieties may occur and seeds are not guaranteed to produce.
**vegan food stuffs only, please